I attended Vancouver’s Polyglot Unconference, met some wonderful people, and got to present a session on Go (#golang). Here’s broadly what I said:

How do you decide what to learn?

You have an amount of cognitive resources to spend every day, what do you invest them in? You have a pile of books at home you’re going to get to, a growing list of “read later” bookmarks, and a list of tech you’ve been meaning to play with. Hopefully that list will be even longer by the end of today.

Picture a Venn diagram, three circles, with their intersection about where I’m standing:

Here in the middle, at the intersection of the three, are things worth learning, and I’d like to share why, for me at least, Go fits in this middle space. 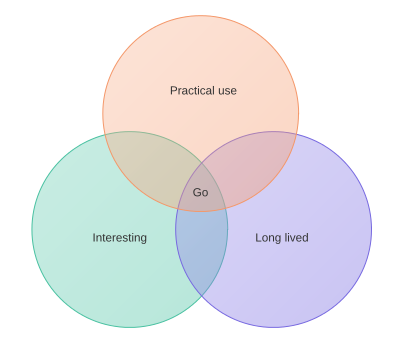 Go is a general purpose programming language, initiated at and supported by Google, open source (BSD), which feels somewhere between C and Python, has fantastic concurrency support, and gets all the small things right.

I’d like to spend most of the time talking about why it’s a really interesting language, this circle, but first I’d like to place it here – things that will be here in 5 to 10 years, for four reasons:

Here’s Hello World in Go. As you can see it’s definitely C-family. Everything has to be in a package, and an executable needs a main package. Execution starts at the main function.

The golang.org website allows you to play with the language online. It’s like an executable pastebin. That means sharing code and helping others gets a lot easier – we’re all talking about the same code, and we can check fixes immediately.

Let’s look at something a bit more interesting:

Interfaces, no classes, duck typing. Composition over inheritance. There are no constructors, the convention is to make a function called NewMyType. Object’s feel a lot like C.

The most exciting part of Go is it’s concurrency support. It was designed as a language to write servers, although it’s now billed as general purpose.

Starting a Go routine, and select

Putting data on a channel

Great concurrency support. go starts a go-routine, which you use instead of a thread or sub-process. Each go-routine has tiny memory footprint, and is very cheap to create and tear down (much cheaper than a thread or process). The runtime might move your go-routine to a different core for you.

Channels are how you pass data between go-routines. select listens to multiple channels. On linux it uses epoll internally.

This means there’s no C10K problem. No callbacks, which I find hard to follow. Everything is blocking. Multi-core support is free.

This is the same concurrency model as nginx. Here’s an efficient static file server in Go – you might not need nginx:

Note the request object, and the templating. Go has a basic web framework in the standard library.

The unit of deployment for your webapp is a compiled file (plus static assets). scp to win!

Most languages, you need to learn a whole ecosystem: the language, the standard library, the package manager, deployment and hosting tools, the web framework, the list goes on. In Go these are either unnecessary or built-in.

Dependencies: You can declare a dependency (import) on a github project (any git, hg, bzr, svn). When you go install myproject it will download the dependencies, build them, and install your project. This is like pip / gem / maven / etc, but with the Internet as the repository!

I think Go will make it. I hope to of convinced you that it is interesting, and useful. Hence I believe Go is worth your cognitive investment.

I personally found it a joy to use, and easy to learn. The power of C with the ease of Python. No earth shattering paradigms, it just gets all the small things right. Go does for writing servers what Perl and Python did for text processing.

What are your questions? I know other people have been playing with Go, maybe you can share your impressions?